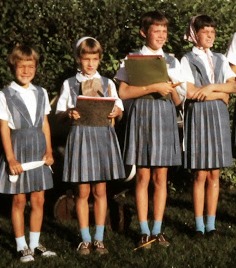 I love deals.  To a doer, a deal means we got something done here.  To a people person, a deal means we just connected.  To a transaction junkie, a deal means that dollars changed hands.  These are all good things when we are trying to move money in ways that improve the world.  Right?

I was surprised when a friend asked me to find a less offensive word for closing an investment agreement. For her the word deal has a little slime factor, despite the fact that she has many hundreds of deals under her belt.

As a first step I found out that the word deal comes from the Old English dael, meaning divide or split up.  That makes sense, and no slime there: dealing has an honorable etymological past in the necessary human activity of dividing stuff up.

Then I closed my eyes.  My deepest association with “deal” came right up, from childhood.

In my family, to say “we had a deal on that” was to invoke the highest level of responsibility to your word.  Of course there were eleven of us and deal-making was rampant in the household.  But this was good.  It was a given that family resources were limited, and that each of us had our own stocks of time, talent and “stuff” that we could share or not.

So we wheeled and dealed.  We gained and lost.  We weaseled out and learned the consequences.  We honored deals and saw how that worked too.  I think we got pretty good at dealing.

We didn’t know it, but we were also developing a large stock of family currency, called trust.

I don’t know where the word deal went south with my friend, who is a wealth adviser.  It makes me sad.  Because when we make a deal, whether it is with a sibling to trade dish-washing for borrowing jeans, or with a company that promises to create impact with our money, trust is on the line.  Both parties are a little exposed.

Every deal is a chance to grow the stock of trust in the world. And every time it works, we are emboldened to try again. Deal by deal, we divide the stuff of this world up, over and over.  And, deal by deal, we can make that division more fair.  We can try more creative terms.  We can aim for higher outcomes.  But it only proceeds when the trust is built, incrementally, transaction by transaction.

One thought on “What’s in a deal?”

What’s in a deal?

In my family, to say “we had a deal on that” was to invoke the highest level of responsibility to your word.